How One Problem Turned into Millions of Wishes at Disneyland Park

How One Problem Turned into Millions of Wishes at Disneyland Park: "

On April 9, 1961, Walt Disney dedicated the Snow White Grotto, a tranquil spot in Disneyland park you won’t want to miss. Located at the eastern end of the moat around Sleeping Beauty Castle, its quaint wishing well has launched millions of wishes into the world. Do you know the the story behind this serene locale, and how it began with a problem of proportions? 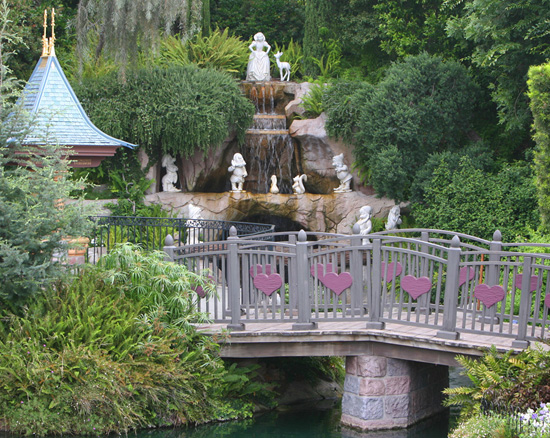 The white, marble figurines depicting Snow White and the Seven Dwarfs arrived anonymously from Italy as a gift for Walt Disney. They were exquisite, but every statue was roughly the same height. How would Snow White, the princess, project her royal presence if she was no taller than Dopey?

Walt Disney was determined to find a way to include the figurines within Disneyland park. As the story goes, Disney designer John Hench was perplexed when Walt first gave him the figurines to display. Then he found an ingenious and elegant solution. The major elements of the scene were scaled to create the illusion of distance and height and Snow White was placed at the top of the diorama, where she stands majestically above the scene. This created a forced perspective. Viewed from the adjacent footbridge, Snow White appears perfectly proportioned in relation to her friends.

Hench did such a magical job creating the scene that three other Disney Parks have since incorporated the montage – disproportion and all – in their Castle forecourts.

The soundtrack at Snow White Grotto includes chiming bells, woodland creatures and the voice of Snow White from the original movie. In 1983, as part of the New Fantasyland opening, Adriana Castelotti recreated her performance of “I’m Wishing” from the Oscar-winning 1937 film. Snow White sings throughout the day in the Grotto and even this feature has a magical quality as listeners hear the voice of the princess float out over the waterfall, then echo back from the Wishing Well.

Throughout the years, guests have tossed pennies and small coins into the well, along with their wishes. They may not realize that making their own wish also grants a wish. For decades, the money collected in the Wishing Well has been donated to children’s charities. Inscribed on the well is the sentiment: “Your wishes will help children everywhere.”

How One Problem Turned into Millions of Wishes at Disneyland Park by Michele Himmelberg: Originally posted on the Disney Parks Blog