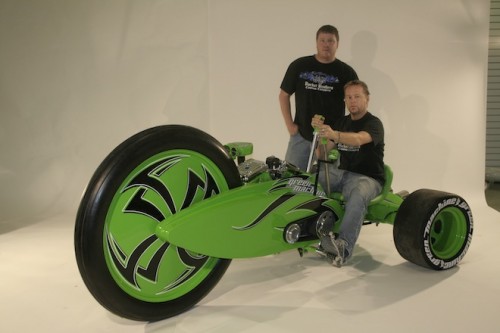 The Green Machine was a classic toy from the 1970s. It steered from the rear using levers, thus allowing riders to make very sharp turns. Parker Brothers Choppers built this Green Machine for adults. It’s powered by an 80 cubic inch Harley-Davidson engine and steers from the rear, just like the original.

“We had a Green Machine lying around the shop and we figured it would be a cool idea,” said Parker Brothers’ Jeff Halverson, who did 50 mph on this beast. “It rides crazy and is fast as heck. If it wasn’t for the rear tires we could have had it DOT approved.”

Instead of the Department of Transportation, however, Parker Brothers is looking for approval from the Guinness Book of World Records as the world’s largest wheel on a motorcycle trike.